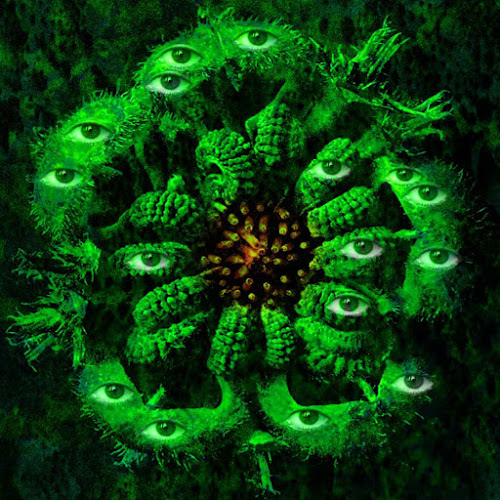 The Soul of the World is rather easy to find if one knows where to look.
Posted by carlosruizbrussain at 4:55 AM No comments: 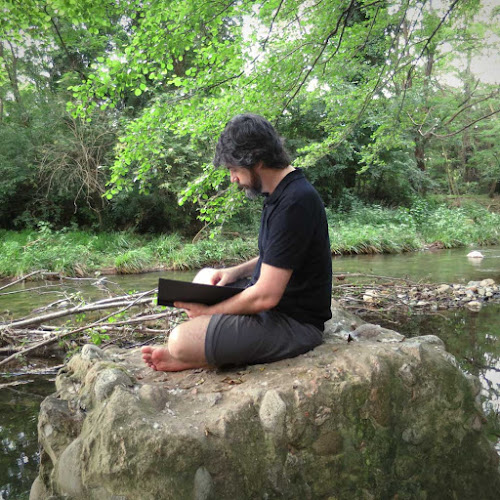 In the confinement of these past weeks, I have rediscovered the power of drawing as a meditation technique that allows one to connect with the contemplation of everyday objects, spaces, and situations, which, in turn, leads to the revelation of the present: an eternal moment that happens here and now.
Posted by carlosruizbrussain at 7:50 AM No comments:


This video was part of the exhibition held at the launch of Monad: Journal of Transformative Practice (monadjournal.com/ and monadjournal.com/launch/) that took place at the University of Northampton on November 9, 2017.
"Trans-Formations" is a series of illustrations and videos that explores the mutations of consciousness in a graphic way. Every illustration represents a specific moment that involves particular (but transitory) states of mind, which, in turn, leads to the next metamorphosis, each entailing the flow of psychic energy and the transformation of libido as time passes by. Hence, even they can be regarded as single images, every illustration is a piece of a narrative and also part of a psychological process.
My research explores how fantasy thinking might be increased by the use of ludic activities that involve chance and randomness—because the systematic use of chaos (as provoked or deliberate accidents) permits the appearance of synchronicities that challenge causal relationships. Therefore, I mainly seek the irrational in the playful as a strategy to transcend directed thinking. Additionally, I see play as a return to the daemonic world of instinct, which enables me to connect with complexes, archetypes and symbolic images.
Both aesthetically and conceptually, I draw from Jungian, archetypal and transpersonal psychology. Thus, the world of dreams, reverie states and lucid dreaming—moods that allow the emergence of soft, mouldable and poetic realities—are very relevant to me. In the case of these illustrations, they are inspired by concepts such as phylogenetic endowment, atavism, perinatal matrices, mercurial shape-shifting, and hermaphroditism.

These images were made using a free play approach. This technique consists in constructing an iconographic schema that works as a starting point for drawing improvisation (I usually begin with certain familiar motifs and then jump to variations). For me, the heart of free play is a flow of consciousness that allows raw material to emerge from the unconscious. The goal of my practice is to release, integrate, and transform this psychic material.
Posted by carlosruizbrussain at 2:02 AM No comments:


Cacti Paintings Video
Posted by carlosruizbrussain at 4:41 AM No comments:

R.B.Dharma is the title of the creative collaborative project we have been developing with Gemma Rabionet Boadella from 2006. Since then we have made hundreds of pieces working together.
Some of those works had been published in the book R.B.Dharma published in 2019:
https://arebedharma.blogspot.com/2019/09/libro-rbdharma.html
Additionally, we offer creative workshops for the process of inner development:
https://www.astrospiral.com/rbdharma
--
R.B.Dharma es el nombre del proyecto creativo y colaborativo en el que trabajamos con Gemma Rabionet Boadella desde el 2006. A partir de ese año, hemos generado cientos de obras trabajando juntos. 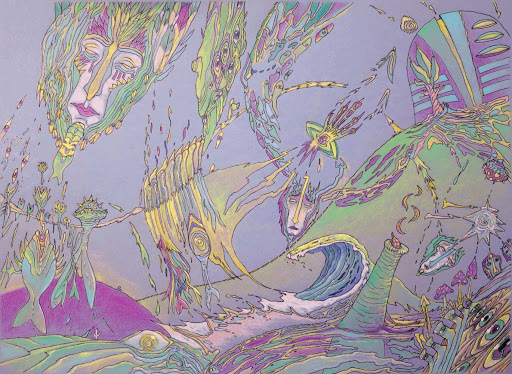 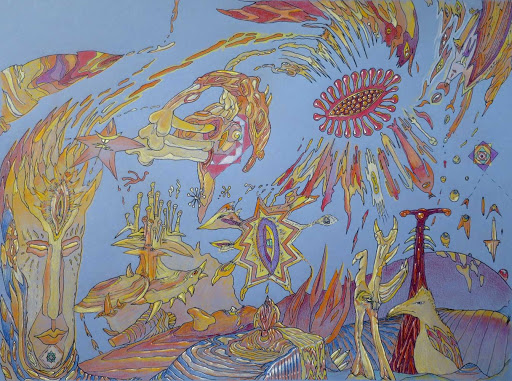 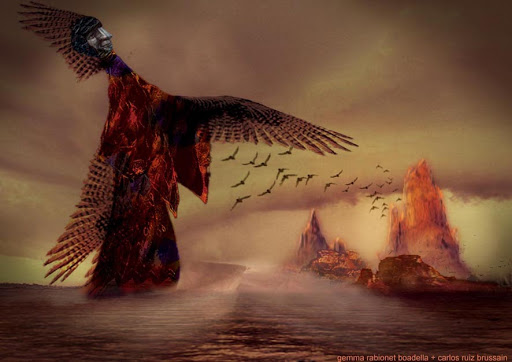 Trans-States: The Art of Crossing Over edited by Cavan McLaughlin and printed by Fulgur 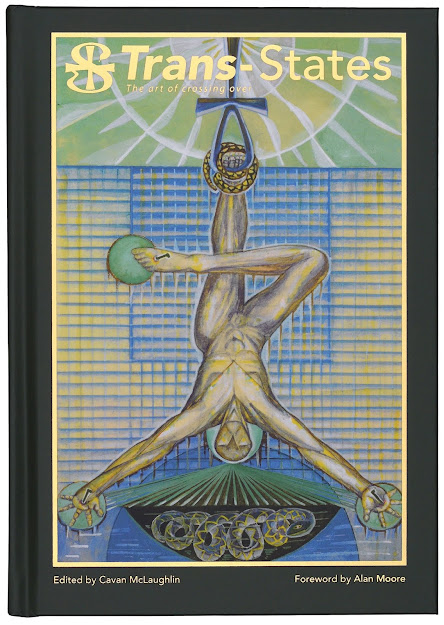 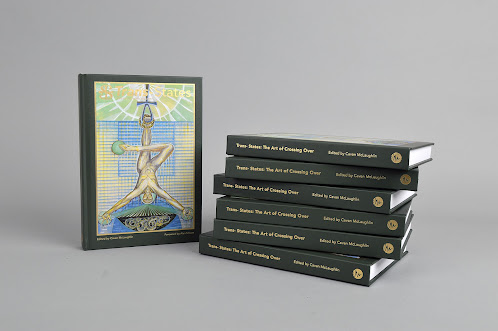 Trans- States is an experimental, transdisciplinary conference held at the University of Northampton that seeks to bring about a valuable convocation of esoterically-inclined minds: a meeting of academics, independent scholars, magical practitioners and artists with shared interests in both the study and production of contemporary occulture.
A shameless pun, a ‘trans- state’ (playing on ‘trance state’) is, among other things, a coincidentia oppositorum: an alchemical wedding that defines the fixed place, where boundaries are actively transgressed – where the role of the magician, mystic and artist collide.
This volume features a collection of essays inspired by, and in some cases developed directly from, the inaugural Trans- States conference in 2016. Our contributors offer different perspectives on work produced by artists undergoing – or seeking – alterations in consciousness; on art created for the very purpose of bringing about transformations in the artist, the wider culture, and even: reality itself.

CONTENTS
Trancing in the Streets – Alan MooreOn the Art of Crossing Over and What Lies Beyond – Cavan McLaughlinWithin the Hyperdream Magic Circle: Manifesting the unconscious through illustration games – Carlos Ruiz BrussainHermes and the Spider God: Invisible texts and hidden subjectivities in the study of esotericism – Georgia van RaalteRitual Occultation and the Space between Worlds: Exploring the discursive nature of the ‘flow’ state in Black Metal and Pagan performative practice – Jasmine Shadrack, Charmaine Sonnex and Chris A. RoeTransmutation and Transmission of a New Iconography in the Thoth Tarot – Richard KaczynskiBlurs from Beyond: UFO photography and the image-ination – Laura ThursbyThe Naked Soul: Ecstasy, elitism and secrecy in the work of Stanislaw Przybyszewski – Per FaxneldSaving the Lives of Angels: Joséphin Péladan’s vision for redemption through the arts – Sasha ChaitowBlack Wholes and Dark Continents: Flesh as a language frontier – Stefanie ElrickKnowledge, Affect, and Ritual Magic – Rebekah SheldonModern Angels: Exploring transdermal body art and body modification as transformative practice and political resistance – Roy Wallace
Posted by carlosruizbrussain at 8:45 AM No comments: 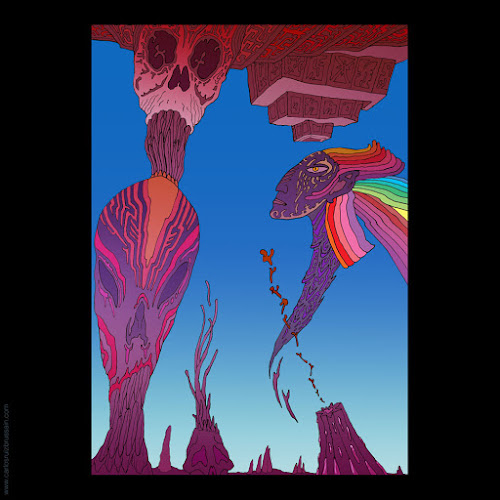 Posted by carlosruizbrussain at 8:37 AM No comments:

Within the Hyperdream Magic Circle: Manifesting the Unconscious through Illustration Play and Games

Still, the link between play, creativity and magic; the thought processes involved; and, the creative rituals that predispose artists for their “shamanic journeys” has been almost neglected. Beyond the isolated cases of A. O. Spare, X. Solar, and J. Pollock, Dadaists and Surrealists were the most important antecedent in the conjoint practice of the three disciplines but, even there is some literature on their ludic activities (Brotchie & Gooding, 1995; Laxton, 2003; Dickerman, 2005; Malone et al., 2009), and some that analyses the link between both avant-gardes and magic (Balakian, 1971; Choucha, 1992; Warlick, 2001; Moffitt, 2003; Rabinovitch, 2003; Lepetit, 2012; Bauduin, 2012), formal investigation about the relationship between games, magic and art is scarce. Additionally, fantasy thinking and rituals cannot be separated from ludic nor magic activity, but within the arts, they have not been studied with the attention they deserve.

My practice-led research analyses the development of a play-based creative framework for visionary and fantastic illustration practice. It is inspired by the world of dreams, reverie states, and fantasies and explores how fantasy thinking might be increased by the use of active imagination and play dynamics for their value as motivators for creativity. It encompasses different ludic approaches, techniques, and tools designed to provoke motivation through randomness and unexpectedness, which allows the emergence of raw archetypal and symbolic material.

I have been using Surrealist games, the theory of flow introduced by Csikszentmihalyi, and depth psychology as key references.

In conclusion, I argue that the thought processes involved in the creation of visionary and fantastic illustration should be related to fantasy thinking, which can be provoked by playful activities practised as magical rituals.

https://www.youtube.com/watch?v=2SRfTUJcSWg&feature=youtu.be&fbclid=IwAR0EmfAGLeXUVwZFSkEGPlInc-zCgKe6SwCLbzYj0jCSdUN03dIN7VvBQWQ
In Jungian psychology, the shadow is the unconscious or unacknowledged part of a person that is excluded by the conscious side. Thus, it could be said that it represents the archetypal forces of darkness and evil; mainly because it is composed of uncivilised drives, repressed wishes, morally inferior impulses, obscure desires, infantile resentments, regressive fantasies, etc. These underdeveloped attitudes that spring from undifferentiated states of consciousness are generally rejected as irrational, immoral, unattractive, antisocial and they are substituted with other thoughts and actions that coincide with collective expectations: socially accepted values and patterns of behaviour, which, in turn, are consistent with the conscious principles that define the ‘persona’ (the mask one wears in social life that condenses the ideal aspects of oneself). However, the shadow should not be refused, as it is a powerful source of creative inspiration, renewal and intrinsic motivation.
This paper explores how shadow-work could be utilised in creative practice. Drawing from C.G. Jung’s concept of the transcendent function, my approach basically consists in using negative feelings and memories as the starting point or prima materia that enables me to direct psychic energy from one level of consciousness into another. This flow of psychic energy is achieved by means of images loaded with affect that work as emotional containers, which eventually transform into new symbols. In order to lower defence mechanisms that allow the manifestation of raw psychic material, I employ techniques such as dreamwork, active imagination, shamanic journeying and ludic activities. I mainly use this method in painting, drawing, authorial illustration and creative writing, but I will also discuss how it could be applied to other creative fields.